What progress have we made since the launch of Closing the gap?

Two years after the publication of the #ClosingTheGap report, Amatey Doku, Nous Group consultant and co-chair of the University of Cambridge Black Alumni Network, looks at progress that has been made to close UK universities’ ethnicity degree awarding gaps and what more must be done.

Almost exactly two years ago, the National Union of Students and Universities UK’s #ClosingTheGap report was published, the culmination of a project which had taken me and my co-chair Baroness Valerie Amos across the country, engaging staff and students with a series of roundtables on the issue of Black, Asian and Minority Ethnic (BAME) student attainment at UK universities.

The report’s publication was an important moment: the sector’s leading body setting out the stark 13% gap between the likelihood of white students and students from BAME backgrounds getting a first or a 2:1 degree classification, contextualised with evidence of wider racial disparities alongside six key recommendations, and a bank of case studies of good practice.

Since then, I have seen the work cited in reports, articles and papers, and used by many to make the case for change within their own institutions. But two years on, what progress has been made to close the gap?

While the last year has seen a noticeable shift, it is still too early to see whether this is a long-term acceleration in reducing this inequality. However, the social, political, and regulatory landscape are keeping these disparities firmly on the agenda and we are starting to see some institutions take the bold steps needed to face up to these inequalities.

Has the sector turned a corner?

The gap has closed in the last year, but the jury is still out as to why. When the report was published, the headline was a 13% gap between white students receiving a first or 2:1 degree classification (80.9%) and BAME students (67.7%).

Still a significant and stark inequality, but some might ask whether this shows that the sector is turning the corner. An important question, but it may be too soon to tell.

The impact of Covid-19

This past year of the pandemic has been unprecedented for the full range of reasons that we are aware of, but for the purposes of understanding the awarding gap, the delivery of teaching, modes of assessment and the way in which grades were calculated changed significantly.

Students were all taught online for most of the year, mass in-person exams were replaced with a range of online assessments, including open-book and “take home” assessments, and no detriment policies impacted the grades awarded.

All these factors must be taken into consideration and their impact analysed before any conclusions are drawn about the longer-term impact of closing the gap.

As universities return to a new normal with some aspects of the current teaching model kept, but other aspects ditched, it will be important to learn lessons and explore whether any of these factors hold part of the answer in closing the gaps. Failing to explore this in detail could risk the gaps widening again.

It is also important to acknowledge that the political, societal and regulatory landscape has moved on since the report was published two years ago, bringing the awarding gap and wider racial disparities in higher education into sharper focus.

Any current conversation or discussion about race now happens in the context of the Black Lives Matter protests in 2020 following the murder of George Floyd.

Many institutions were criticised for putting out statements which were not felt to be backed up by genuine action, but regardless, the protests continue to shape the public discourse on race and suggest that race will continue to be on the agenda for the foreseeable future.

There are regulatory pressures too. Since publication of the report, the Office for Students has required higher education institutions in England to set targets for closing awarding gaps as part of their Access and Participation Plans, part of their broader agenda to focus not just on access into higher education but also outcomes.

While change can sometimes feel slow in this space, this context suggests that the spotlight on the sector’s race inequalities will only increase with time.

Since the publication of the report, we are seeing some institutions take bold action to tackle racial inequalities, adopting strategies which take a whole institution approach to tackling these inequalities.

The recommendations from the #ClosingTheGap report still hold true today: leadership is key, institutions must embrace difficult and uncomfortable conversations about race, and institutional data needs to be used more effectively.

However, I would add that those institutions who appear to be making the most progress are taking a truly institution-wide approach, centring the voices of BAME students and staff, but resourcing efforts effectively so that those who experience these inequalities are not required to do all the labour to fix the problems.

There is much more to do and a long way to go, but I remain optimistic that the sector will make progress in tackling these inequalities. 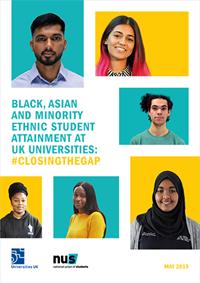 An attainment gap between students of different ethnicities exists at the vast majority of universities.

Insights and analysis
Equality, diversity and inclusion
Student success
Back to top