Impact of the Augar review: an independent assessment 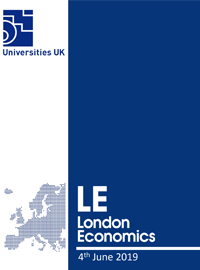 This briefing provides an independent assessment by London Economics of the impact of proposals in the Augar review on the exchequer, students, graduates and higher education institutions.

To inform the debate on proposals set out in the Augar report, UUK commissioned London Economics to provide an independent assessment of the impact of the report’s recommendations on the exchequer, students, graduates and higher Education institutions. The full analysis looks at the impact of proposed changes compared to the current system, across a range of measures including student loan debt on graduation, graduate lifetime loan repayments, costs to the exchequer and higher education institution funding.